It’s become very trendy to announce that one word is going to set the intention for the year. My word last year was “Release,” and I did release a few things – my job at HCC, my fear of changing up the way I ran my private studio, and relationships that didn’t suit me.

I decided that this year’s word is Recreate. There are two meanings for this (with this spelling), according to Merriam-Webster:

I want to give new life to some things, including the idea of performance, as in the upcoming Curiously Stronger Performing workshops, which will start up on January 8. I want to explore new ways to approach things. And I want to play. Both in my work and away from it.

What’s your word? How did you choose it and how will you implement it? 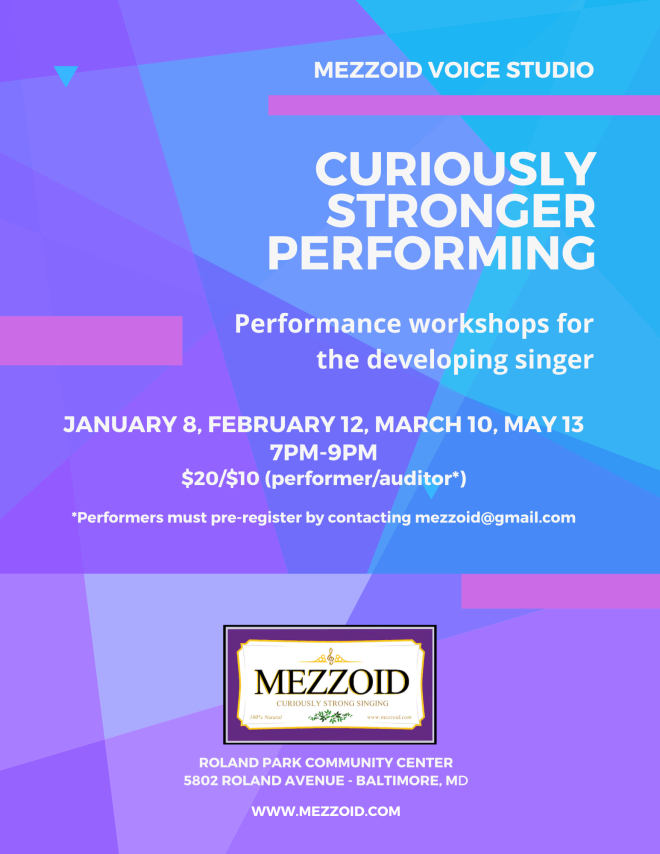 I follow a fashion blogger whose site is called une femme d’un certain âge and recently, she had her colors and style done and it turned out she was wearing all the wrong colors and styles for her “type.” (I have to admit that the company who did her analysis was right – her clothes are much more flattering than they were before, and I thought she looked good before.) Someone asked her if that means she’s thrown everything out, even some of her favorite things, and she said, in today’s blog: “No. I still believe in ‘tools, not rules.'”

That phrase resonated with me. There are so many rules that we think we have to follow as singers. We have to avoid certain foods, we have to stand a certain way, align ourselves just so, sing only one kind of repertoire or one kind of style, and never do anything that might be considered “wrong.”

What we work in lessons is collecting a series of tools that you can use for learning and performing your music. For example, we work on having a silent inhalation and a balanced onset, and releasing into the breath, rather than gasping for air or sighing at the end of a phrase. And for the most part, those tools are the rules.

Except when they’re not.

You can’t do it all the time, but sometimes, you have to break the rules.