Longer ago than I want to admit, I was in a choir at the Basilica of the National Shrine of the Immaculate Conception as a paid alto chorister. For those of you who aren’t that well-versed (no pun intended) in choral music, mezzos usually sing alto in choirs. This is due to tessitura, rather than range. I’m more comfortable as an alto 1 than alto 2, but definitely not comfortable in S2.
Our conductor, Leo Nestor, was working through a piece, and turned to us and said, “Okay, altoids, let’s go over this part,” and I said, “Excuse me, but I happen to be a mezzoid.” He said “What’s the difference?” I said, “I’m still curiously strong, but I sing a minor third higher.” (Cue music nerd laughter.)
Since that time, I’ve gone by mezzoid as an email address, first with AOL (in 1996!), then with wi.rr.com, and for the last 10+ years, with gmail. Then I got a website mezzoid.com, and then a personalized license plate (first in WI, now in MD). It’s been my brand. When I check into conferences and workshops around the country, people recognize me from my posts on the now-defunct Vocalist bulletin board and other places.
So I have officially changed my studio name to Mezzoid: The Voice Studio of Christine Thomas-O’Meally (and I’ve changed the URL to MezzoidStudio). I commissioned a logo (below). I’ve updated my website and included Mezzoid as part of my identity.  I changed the URL of this blog from omeallystudio to mezzoidstudio. 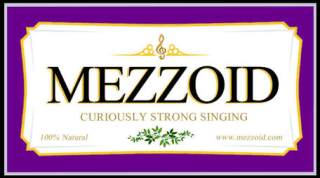 New studio polices will be “dropped” on Tuesday, September 4, with some clarification of things to expect – from me to you and from you to me. Lots of ch-ch-changes ahead! And this is a good thing, as Martha Stewart would say.