A lot of things happened in 2017. One of my friends did a chart with colored markers but I’m much more into typed lists than I am graphic design, so here’s part of it:
The year didn’t have too many downsides, personally. Donald Trump is still president, and I have hated him for 30 years just because of who he is. His presidency and “policies” are just icing on the cake.
My husband had a close call, work-wise. It seems to have resolved itself, but it came at a very rough time and we did not know what the future was going to be. As it stands now, he wound up, through his own perseverance, with a promotion and more (and welcome) responsibilities.
The hardest thing, of course, was the diagnosis of my beloved Pippin with cancer, resulting in the amputation of his left hind leg. We don’t know what his outcome will be. He’s doing really, really well and we’re meeting with the oncologist in a week to explore chemo and other treatment possibilities. 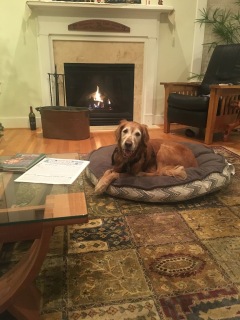 Tomorrow I want to explore the things that will (or might) happen in 2018. Overall, I’m pretty pleased with how this year went for my family and for me, professionally and personally.